The Rhine flows a distance of 1,325 kilometres from the Saint Gothard Massif in Switzerland, where it rises, to the North Sea in the Netherlands; it crosses the Alsace Plain for 183 km between Huningue and Lauterbourg and marks the border between France and Germany.

The upper section of the Rhine has undergone various developments: correction, stream flow regulation and channelling between the 19th and 20th centuries. Starting at the Iffezheim locks, the Rhine has undergone correction and stream flow regulation works and is free-flowing to its mouth in the North Sea and encounters no dams.  The waters of the Rhine bathe the riverbanks (18 km) at Beinheim, Seltz, Munchhausen, Mothern and Lauterbourg. The banks of these five French towns on the free-flowing Rhine are therefore subject to variations in water levels caused by snow melting in the Swiss Alps, the Vosges and Black Forest massifs and any rain storms. During the correction works, the waters of the Rhine were corralled into a low-water channel between two banks or corrective dykes 220 m to 250 m apart; in periods of flooding, these corrective dykes are submerged and the Rhine flood plain is delimited by flood dykes or high water dykes.

During a major spate on the Rhine, each local town on the Rhine is required to participate in flood control (monitoring the high water dykes) pursuant to the bylaw of 2 July 1891.

Walking on the corrective dyke and depending on the water level, you can spot the groynes put in place during the stream flow regulation works in the 20th century; they are made of rockfill and are positioned at 90 degrees to the banks of the Rhine. You can distinguish between short groynes and long groynes, which are intended to: 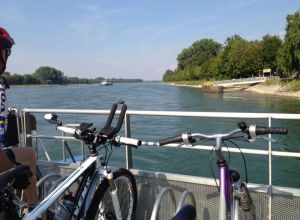 A degree of utility to trade 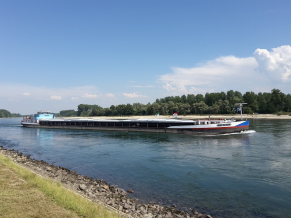 It has to be said that the Rhine is very busy in this sector; daily traffic is approximately 110 vessels carrying approximately 100,000 tonnes of very diverse freight (goods): cereals, metallurgical products, fertilisers, gravel, wood, petroleum-based products, chemical products, etc. Shipping by container carriers grows each year, making it possible to transport several hundred containers by boat per day, thereby relieving the road network. You can admire the cruise ships, floating luxury hotels heading for the Romantic Rhine, Rotterdam... as well, in summer, as many pleasure yachts and, on this international waterway, you can identify the flags of a dozen nations. 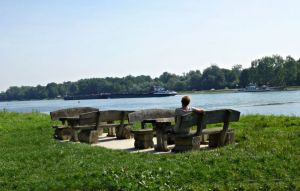 River activity on the Rhine is continuous, 24/7 and 365 days a year. It is not slowed down by fog or at night. High water alone may disrupt traffic and the boats are directed into the ports as a safety measure. Thanks to the modern, on-board equipment on the boats (radar, radio, echo sounder, cartography, GPS positioner... navigation on the Rhine is safe and accidents or other incidents are rare.