Select a criterion to refine your search:
7 results correspond to your criteria
Results per page :

Situated on the banks of the Rhine, the PAMINA Rhine Park is a cross-border area, which covers the largest stretch of interconnected alluvial plains in Europe. It takes in 34 territorial municipalities and local authorities, including 11 on the French bank, and covers 850 km² from Leimersheim (D) / Eggenstein-Leopoldshafen (D) in the north to Drusenheim (F) / Rheinmünster-Greffern (D) in the south. The Rhine, which has shaped the local inhabitants as well as the landscape on either side of the border, is the project's common denominator. Ten museums, two nature and environmental interpretation centres, more than sixty stations along the route, four Rhine ferries and a large network of cycle tracks form the major components of the project.

Discover the area in video !

The ten museums form a veritable network of exhibits, constituting the project's backbone (anchorage points). Ecological realities, historic, social and cultural past, every aspect of life alongside the river is presented in the various museums in the PAMINA Rhine Park.

The Nature and Environmental Interpretation Centres in Munchhausen (F) and Karlsruhe-Rappenwört (D) are the highlights as regards protecting nature, the environment and the natural heritage. The PAMINA Rhine Park is set in a typical alluvial landscape which is home to some quite exceptional flora and fauna. Several Rhineland environments, including the Sauer Delta Nature Reserve, have remained unspoiled and have now become a rarity.

The Rhine Park is an area to explore by bicycle. The various sites in the PAMINA Rhine Park are interconnected by a large network of cycle tracks, which skirt the protected areas of the alluvial plain. The trail is a delight for those scouring the heart of the PAMINA Rhine Park for a haven of peace, but without giving up on exercising. The peaceful atmosphere of the Rhine backwaters is an invitation to dawdle, looking for peace and quiet to observe the natural world without, however, detriment to the inhabitants of the protected environment such as nesting birds, amphibians and insects. Cycling on this trail is a real delight! Total distance of the trail: approximately 130 km. 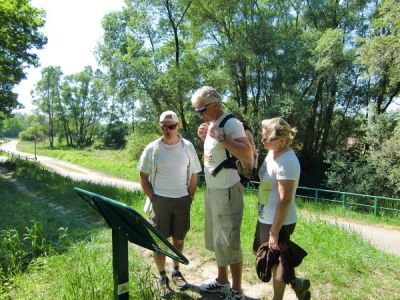 More than sixty stations alongside the route set up in the vicinity of the cycle track showcase the region's curiosities and the noteworthy sites in the Rhine Park. Interesting explanatory panels punctuate the cycle tracks, inviting cyclists to take an educational break. The themes discussed vary considerably and underline the ecological or historic importance of each site.

A selection of "discovery and interpretation trails" invites ramblers and hikers to explore some extraordinary Rhine landscapes at the heart of the PAMINA Rhine Park cross-border area and discover the diversity and charm of its protected landscapes and unspoilt nature.

Four Rhine ferries linking the towns of Leimersheim and Eggenstein-Leopoldshafen, Neuburg and Neuburgweier, Seltz and Plittersdorf, Drusenheim and Greffern, enable cyclists and ramblers to cross the Rhine to get to the other bank.

Would you like to explore a specific aspect of the Rhine Park?
…. Then come and get to know our guides, who will share their knowledge of the region and use their understanding of the land to help visitors. The guides at the Rhine Park are qualified assistants who arrange guided tours to suit your needs, tastes and specific interests. Those with an exceptional knowledge of the region are adept at organising hikes, bike trips or bus tours that lift the veil on the secrets of the alluvial landscape. A guided tour is the perfect complement for everyone: whether you come as part of a group or on your own. 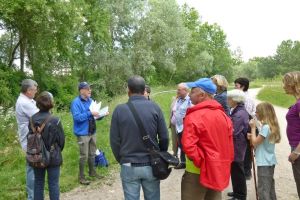 For curious in our territory...

A botanical garden laid out in play and picnic areas. You can see numerous species of trees.

Permanent exhibition: "Once upon a time on the Rhine", recounting the Rhine through imaginings related to the river.

The home of Baron Jean Adam Schramm (1760-1826), a native of Beinheim who was to become an Imperial General, now houses the local authority offices. With the passage of time, its former garden had withered away. In line with a policy to promote the area's heritage, it has been replaced by a botanical garden designed by the landscape designer Agnès Daval: in a limited area are symmetrical beds of rich collections of native plants typical of the Rhine valley and perennials, including glorious peonies and roses from the beginning of the 19th century; extending into the distance is a generous grassy meadow embellished with a gazebo and lined with hedges of shrubs.

Begins downstream of the water gate on the principal structure and ends upstream, at the edge of the discharge weir. This structure comprises 10 pools of 1.50 x 2.80 m and is designed to help fish swim up river.
A practically identical structure has been made in the Berizzi Mill sector at Berg (Palatinate).

The Porte de Landau (1708), a witness to the Vauban epoch, is built on medieval fortifications. A sun sculpted on one side of the gate recalls the oath of allegiance to the King of France in 1680.
Upstairs in an exhibition room is a model of the town's fortifications, based on plans from 1782, and documents tracing the town's history.

A world of nature to explore on your doorstep!

Comprising professional naturalists and volunteer nature guides, the Nature Centre has been endorsed as a “Centre for the Introduction to Nature and the Environment” (CINE). In addition to its educational work with school children, it also works with the general public to introduce them to the countless riches of the landscape and the flora and fauna to be found in its territory.
From the Northern Vosges to the Rhine, from Le Bienwald to the outskirts of Strasbourg, the Nature Centre is our guide to information on and exploration of the living world that surrounds us.
In addition to the activities of the “General Public” and “Schools” programmes, the CINE is able to propose activities according to your more specific requests and interests.

The tumulus was used in Western Europe from the Neolithic period till the Iron Age. The average diameter of a burial mound is 20 metres. The kind of tomb could contain several bodies, funeral urns anddifferent objects from everyday life such as weapons and jewellery. The footpath explaining the tumuli is situated in the 'forêt du Hesselbusch' (the Hesselbusch Forest) in Seltz on the road leading towards Hatten just after the motorway exit. A former Roman road linking Seltz to Altenstadt passed beside these tumuli. Explanatory panels in French and German. Car park for cars and buses.